The valley of Aragon

Through paths and valleys, amid rivers and slopes, the valley of Aragon offers a fascinating landscape that sculpts beautiful panoramic views added to these we find a wide repertoire of Romanesque architecture, small and large villages full of life, and a multitude of resources capable of seducing anyone. The valley, open and sincere, offers a magical world of sensations.

Nature and its whims paint in Biello Aragon a canvas full of silhouettes and colours. The villages, from the smallest to the most cosmopolitan (there are some), arise like static stops along the way, the one that the Apostle Santiago once toured. Its tourist resources, as capable as any, are a hearty and substantial cuisine, and a social and cultural life active all year round, making it a valley with an inherent attraction for the walker, the elitist and anyone who crosses its borders.

Jaca, dominant capital, San Juan de la Peña, a historic monument par excellence, Astún and Candanchú, snow sport centres, Hecho and its gastronomy, Canfranc and the station that has bestowed on it grandeur and magnanimity… attractions that give to this part of the Pyrenees the title of an essential destination when discussing and planning, magical routes.

A sigh at every step 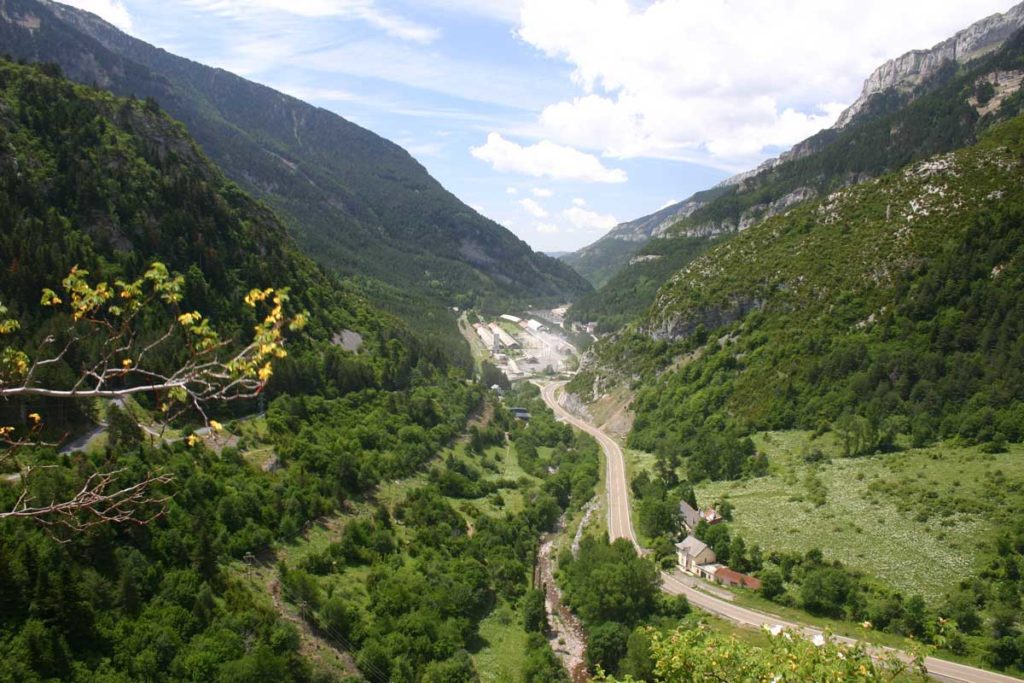 The N-330 road enters the valley of Aragon parallel to the course of the river that divides the region that takes the same name. Taking this path can serve as a guide for traversing the main points and enjoying at every moment the hospitality and beauty of the valley.

As an ascending reference point, we take the city of Jaca, the main nerve centre of the valley that, in this case, will serve as the beginning of this fascinating journey. This is the most obvious route, which is usually taken by huge numbers of tourists, but it is also the most comfortable since the road to it is in perfect condition.

Directly from Jaca, the first stop we will make is Castielo de Jaca. This town, declared a historical and artistic site whose origin is believed to lie around the castle of which there are hardly any remains, keeps the quaintness of a classic mountain town whose outstanding monuments are the 12th century Romanesque church and the shrines of San Bartolomé, the Virgin and St. Juliana, also I2th century. From here you can access the Garcipollera National Hunting Reserve and a series of forest tracks that run across the valley

Getting back on the road we arrive in Villanúa, a decisive point on the Camino de Santiago. It is worth making a leisurely stop and taking a stroll through the network of streets that remind us of bygone times thanks to the splendour of the fountain with four spouts, the houses with coats of arms of the lesser nobility, the narrow alleys or the old town hall with its Gothic windows and its doorway. Without a doubt, a place that has been able to adapt to the passage of time with a very ample hotel infrastructure and services.

And we arrive in Canfranc, first at the village and then the station. In the latter, in addition to the modernist station, an ambassador par excellence, of particular note are the Roman bridge or the Fusillade tower. In any case, they are two places with an attraction capable of leaving the most intrepid or the most curious traveller dumbstruck.

Finally, having left the Canfranc side, the road begins to slope up and winds to reach Candanchú, one of the historic points for skiing in the country which, in addition to winter, throughout the year enjoys an intense and restless influx of public. And from there, almost contiguous, the Astún resort, one of the options for snows sports in Aragon. 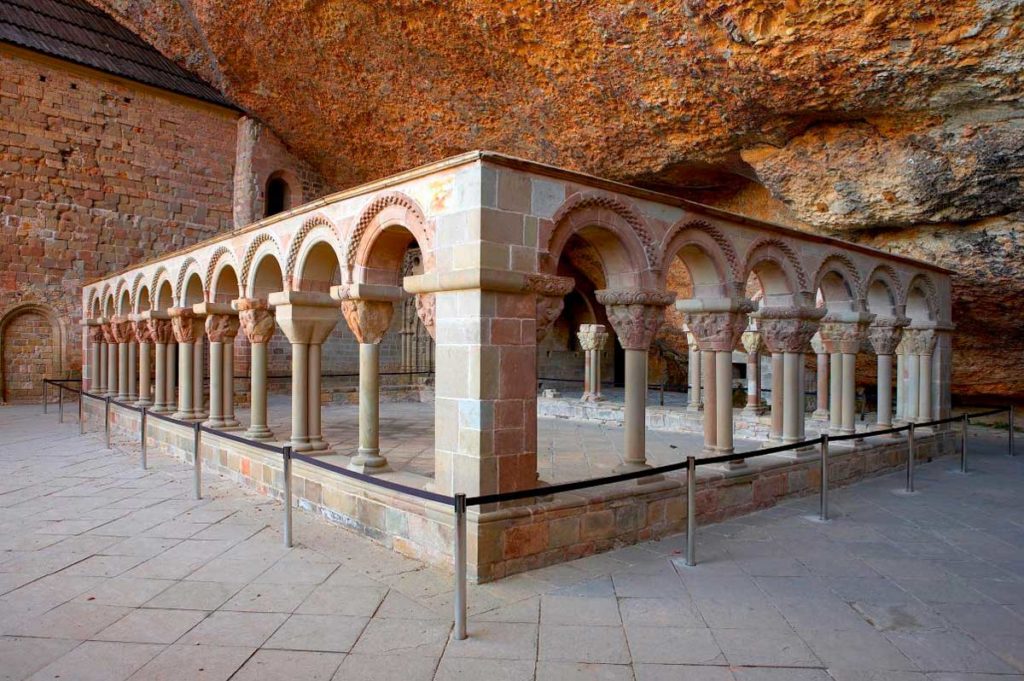 The building comprises a mixture of architectural styles which, together with the landscape that surrounds it, confirms it as one of the most impressive works of all those erected in the Aragonese Pyrenees. The architecture, overlapping at different levels, is covered by a granite overhang that characterizes it as the sheltered monastery.

The fort is perched on a hill from which the city of Jaca can be seen in all its splendour and, in the evenings, offers an unbeatable panorama of the city centre.

The fort of Rapitán, a witness to wars and affrays, is a work of an eminently defensive character that today has become the main hall in the city where important receptions are held. It also houses the Museum of Military Miniatures, one of the most important exhibitions in the world.

Without a doubt, it is worth travelling a few kilometres outside Jaca and can serve as a starting point or as the final destination of any excursion through the valley.

For something more than an hour and a half that the tour lasts, the visitor is immersed in one of the most spectacular points in the valley of Aragon. This is the grotto where the Güixas caves are to be found, located on the slopes of the Collarada, next to Villanúa.

There is a walk full of nooks, stalactites, stalagmites and perfectly lit air shafts. In the largest cave, a small stage has been erected where classical and traditional music concerts are organized every summer. Without a doubt, a magical space which lends itself to being explored by the whole family.

JACA: Epicentre of the Pyrenees 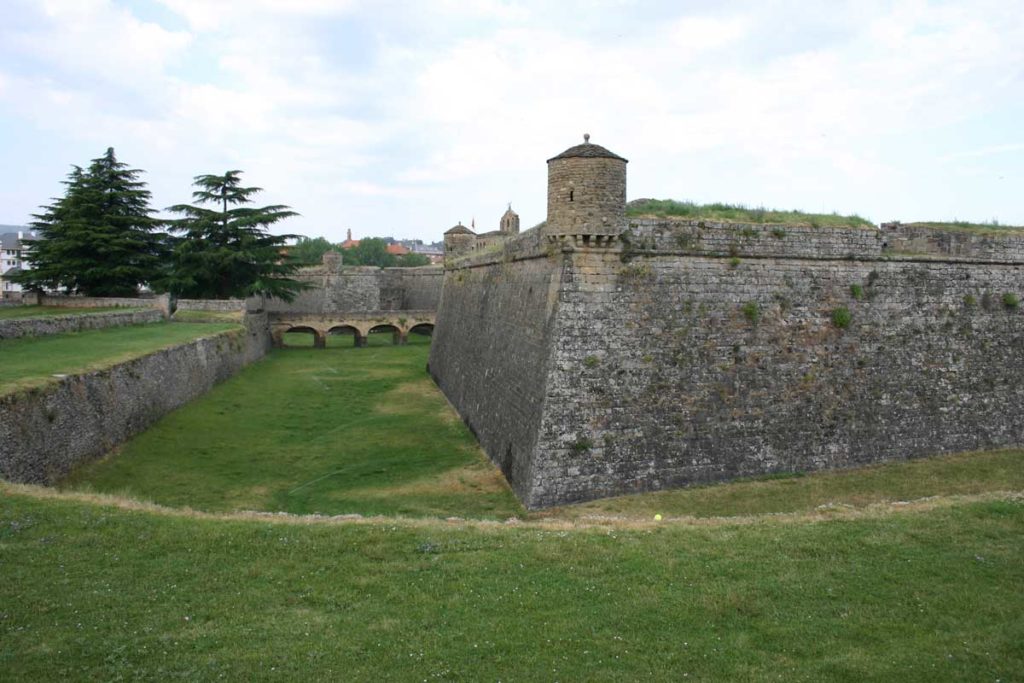 A mixture of illustrious past and modernity, the capital of the valley of Aragon, it is one of the most interesting tourist and cultural centres in the Aragonese Pyrenees. It offers thousands of possibilities in which art coexists with leisure, history with the present, and services and environment with endless possibilities.

A stroll through Jaca affords the visitor no conception of time and represents an unforgettable experience. And if you do not believe it, ask any of the thousands of “people passing through” that wander through its streets every day of the year. The versatility of this city can be appreciated in many of its nooks such as the buildings and historical constructions which alternate with wide avenues, parks, shops… Jaca’s incessant activity never stops and makes it possible to take a cultural tour or a gastronomic visit.

It is one of those versatile places that, wherever you look, it never ceases to amaze. Not for nothing Jaca, besides being a tourist destination, has always been a restless reference point in the lively history of Aragon.

Do not miss visiting:

In the footsteps of the Apostle James 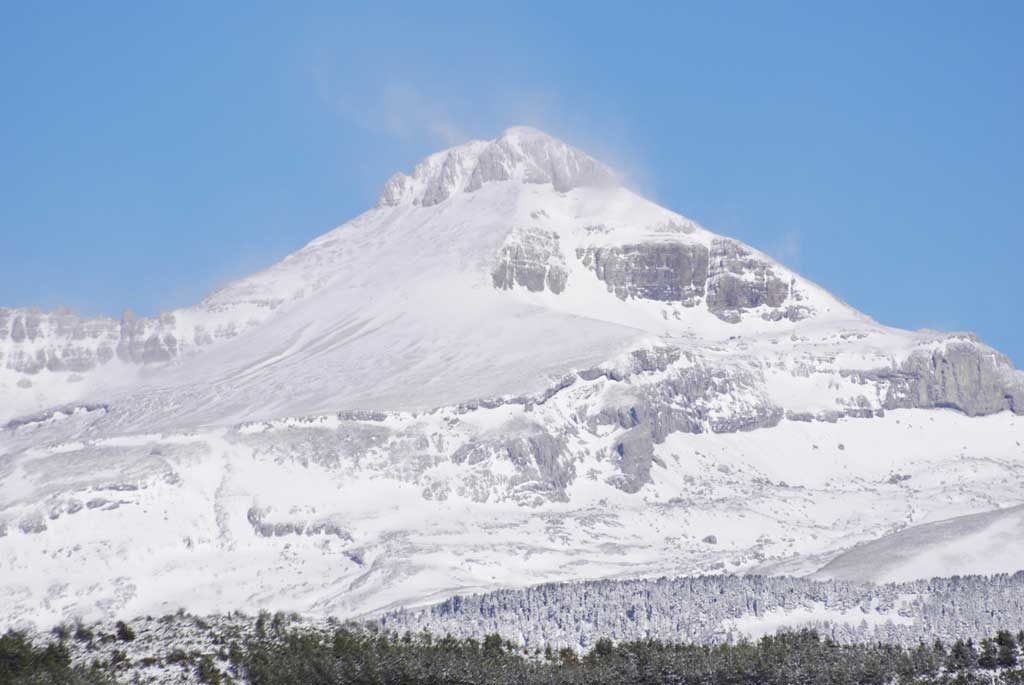 The Camino de Santiago is one of the attractions for those who enjoy this part of the Pyrenees. From Somport to Puente de la Reina, through Canfranc, Villanúa or Jaca, among others, the holy itinerary ends in Undués de Lerda and enters Navarre.

Recommendations for the Traveller:

Pilgrims from all over the world walk the route that started in the 9th century when the bishop pointed to the end of the world in Finisterre, where the Apostle Santiago is buried. From that date, a massive influx began that took as its original route, paths and Roman roads. And only two centuries later, in the 11th century, the kings Sancho Ramírez and Alfonso VI of Castile endowed it with more infrastructure in the form of bridges, hospitals, new roads and baths.

The part of the Camino de Santiago that crosses the valley of Aragon begins in the Somport pass and, from there, continues parallel to the course of the river with the same name as the valley. Our first stop in this section is the ruins of the Hospital de Santa Cristina, built in the 11th century and where the Aragonese monarch Sancho Ramírez stayed. From there you reach Candanchú until it ends in Canfranc, first the station and then the town. The old modernist railway station is still one of those enchanting places that can leave anyone dumbstruck.

But the journey continues towards Villanúa where it is worth looking at the churches of San Esteban and that of San Vicente. Later you will reach Aruej and its small Romanesque church and Castielo de Jaca, a new reference point before arriving in Jaca. At this point, the traveller will be able to regain strength by staying over so as to divide the different stages of the route in Upper Aragon.

The main diversion crosses San Juan de la Peña, one of the defining spots in the history of Aragon, and continues to Santa Cilia of Jaca and Puente de la Reina. And the three last stops, are Artie, Ruesta and Undués where, in addition to historical vestiges and emblematic places, there are three hostels for pilgrims.

From there, through Sangüesa, the road enters Navarre and continues its journey to lead into the holy lands of the apostle.

The logical concern that pilgrims harbour is to know how the road will be signposted. This disappears on discovering that it is perfectly clear. However, it is essential to carry a guidebook in which all the guidelines are listed in detail.

The traveller will be guided by means of yellow arrows, posted on bridges, trees and stones, besides the fact that in some places the classic marks of the GR (a red line on a white one) appear. But a good ally for guidance is the sun; in the morning it will be on the left side of your neck, by mid-morning on your left arm and in the afternoon, before setting, on the left side of your face. Let’s not forget that the road describes an almost perfect route from east to west.

The Valley of the Aragon, whether providing accommodation for pilgrims and walkers or increasing their offer of hotels, has a number of shelters and refuges that are especially indicated for overnight stays with guarantees and very low prices.

On the first Friday of May every year, Jaca celebrates one of its most popular and long-awaited traditional fiestas of the entire calendar. It is a festivity celebrating the tradition of an event that commemorates the triumph of Christian groups in the Battle of Victory (8th century) led by Count Aznar. A day declared of tourist interest that each year attracts more people.

If this festival is synonymous with tradition, the Folklore Festival of the Pyrenees is colour and sound. Dancers, musicians and craftsmen from all over the world gather in Jaca to flood the city with life and joy. A colourful and multicultural environment for a meeting that on even years is held in the French town of Olorón and on the odd ones in Jaca. Everyone gets together at this spectacular parade.

Much more than sport 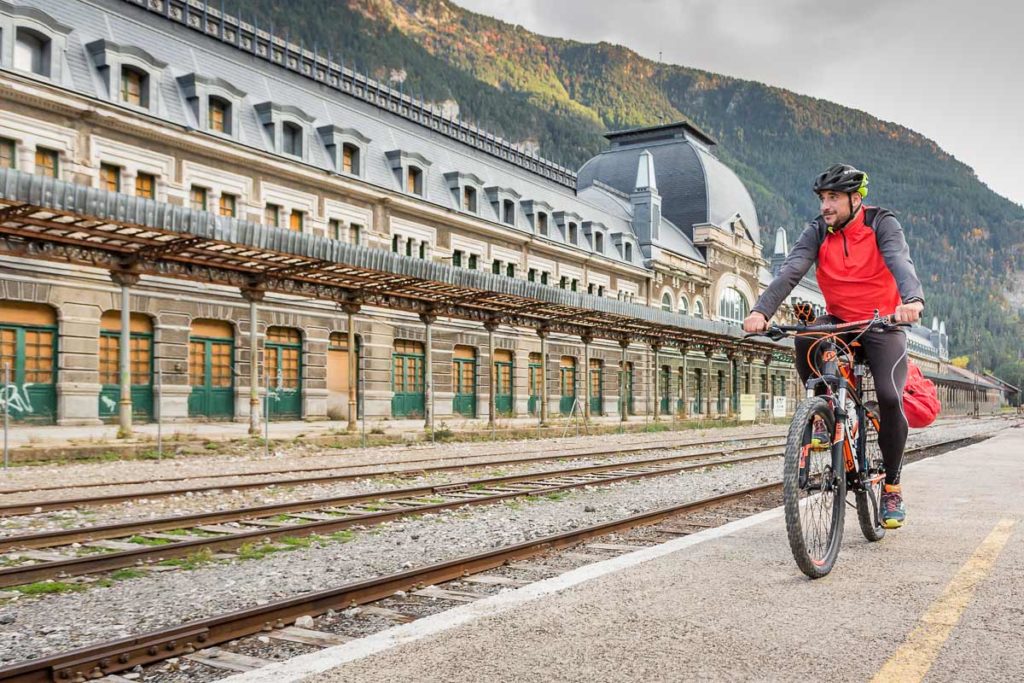 As the centre of the Pyrenean mountain range as it passes through Huesca, the environment of the valley of Aragon, rather than favouring the practice of a good number of outdoor sports, makes it possible to experience nature properly. Hiking along the GR 65 and GR 11 routes implies a veritable discovery for the adventurer who can also practice climbing on the Pico Anayet, Collarada or Aspe, among others. Mountain biking is also another way of crossing tracks and trails of varying difficulty.

Like water sports, canyoning offers many possibilities. Some of the most recommended ones are the ravine of Canfranc, that of Chiniprés and that of Agüaré. And, undoubtedly, the river Aragon is a great place to start practising whitewater canoeing. Finally, fishing in the high mountain lakes also implies combining this practice with hiking.

Santas Cilia Aerodrome serves as a starting point for aeronautical activities, while El Alto de las Blancas on the way to Villanúa attracts the attention of lovers of paragliding. Without doubt a world of unlimited enjoyment. 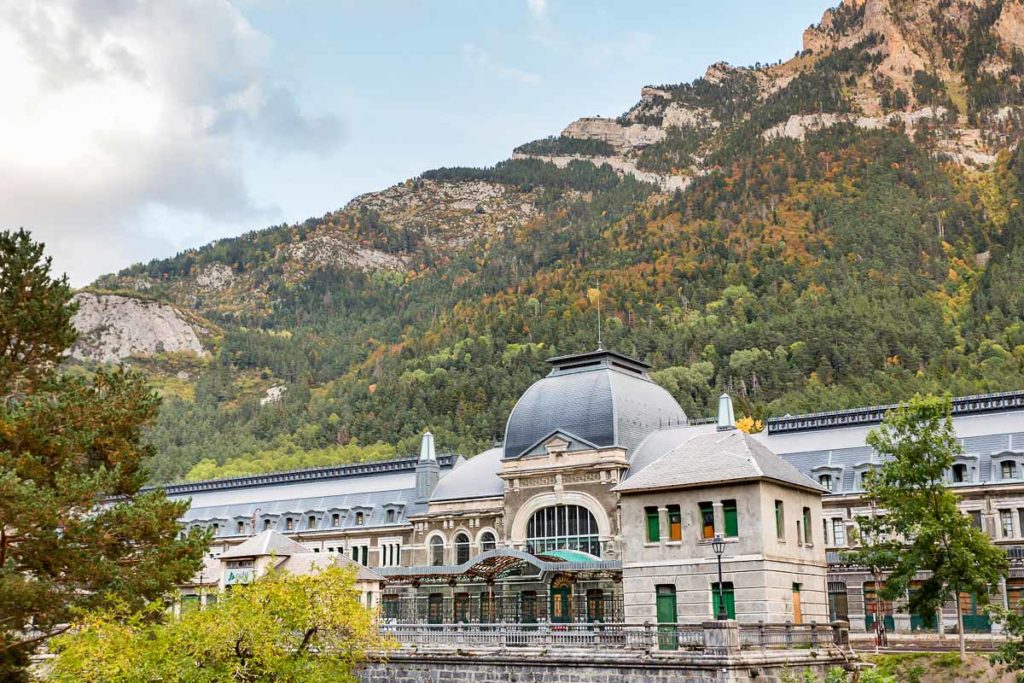