Heart, centre and capital of the province, Teruel welcomes the traveller with a long list of resources in the form of towers, squares and walks added to which in July its annual festival of the Angel, also known as “La Vaquilla”. Discovering all its tourist charms also involves stopping to savour the tasty cuisine and staying in good and pleasant hostelries.

The city of lovers, it is a historical and artistic compendium so rich that it is considered a World Heritage site. Mudejar architecture, a key element of this ensemble, floods the entire historic quarter in which modernism embellishes stunning facades and buildings. But in addition to these styles witnessing the past, Teruel looks to the future with a long list of services. Its Convention Centre and Exhibition Hall, the fervent attraction of Dinopolis theme park, cultural centres, study institutes… a good number of referents that safeguard and consolidate Teruel’s heritage capable of coping with all kinds of tourism.

UNESCO set its sights on Teruel, making it a World Heritage site due to the enormous value of its monuments and Mudejar architecture. Today, this style remains the city’s cultural standard and one of the reasons it attracts cultural tourism. A good example of the Moorish baggage of Teruel is spread over its historic town centre, from whose lofty towers may be contemplated, religious buildings and other expressions of Mudejar style.

Cathedral: Dedicated to Santa Maria de Mediavilla the cathedral is one of the obligatory stops in Teruel. From its façade the tower takes pride of place, built between 1257 and 1258 and result of the Christian taste for Islamic architecture, emergent Gothic and the last influences of Romanesque. In the cathedral stand the Dome, the neo-Mudejar façade, the impressive interior roof and the wooden reredos.

Torre del Salvador: Built between 1211 and 1355, it displays abundant decorative ceramic elements in white and green, as well as its identifying element: interlaced lobed arch wall sections. The tower gate, one of the snapshots most captured by the lenses of tourists and travellers, is a few yards from the Plaza del Torico, on El Salvador street.

Torre de San Martín: Located next to the church that bears its name, the tower has a minaret structure comprising two towers. Also decorated with glazed ceramics in white and green, it has a buttress of 16th-century ashlar. The tower was built between 1315 and 1316 and is located next to the seminary square also known as Plaza Pérez Prado.

Torre e Iglesia de San Pedro: With an original height of 25 metres, it was built in the 13th century and is the oldest of the Mudejar towers in Teruel. At present, if visitors wish, they can go up the belfry by means of a spiral staircase comprising 74 steps. Next to the church, there is access to the Mausoleum of the Lovers, Isabel de Segura and Diego Garcés of Marcilla, sculpted by Juan de Avalos. 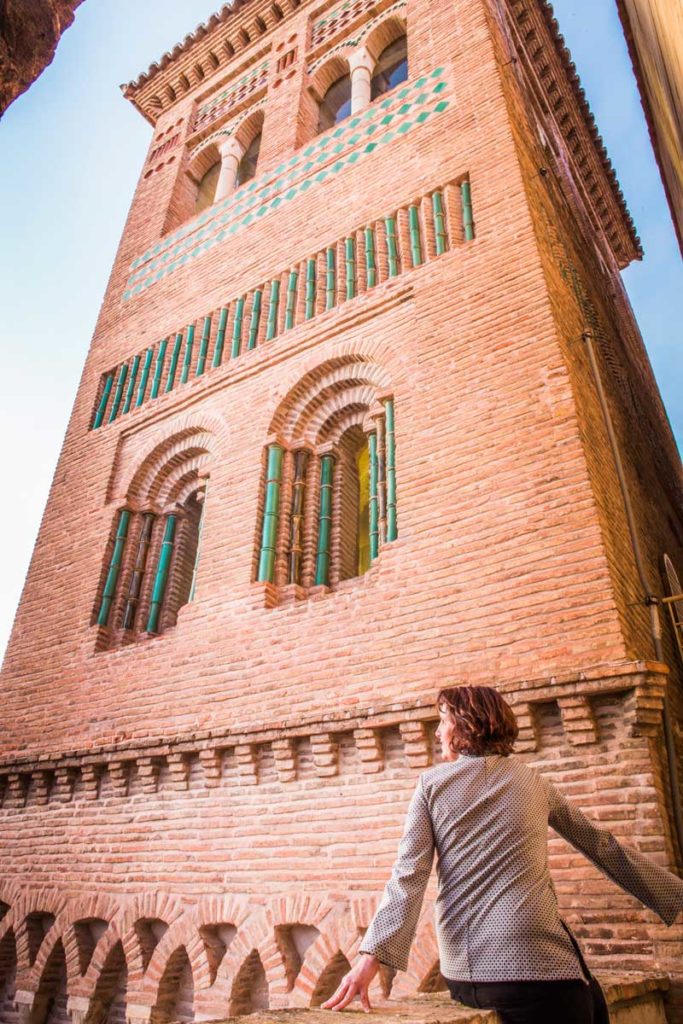 In addition to the Mudejar legacy of the capital’s historic quarter, Teruel offers the traveller impressive prime examples of modernism in some of its constructions. Even though Moorish art remains the artistic standard, the ornamental testament of the early twentieth century also occupies an interesting place within the city’s tourist offer. The person responsible for this legacy was the Catalan architect Pablo Montguió who, from 1909, built the main modernist buildings in the city.

Casa de la Madrileña: Located in the Plaza de Carlos Castel, better known as del Torico, this construction shows simple ornamentation perfectly in keeping with surroundings of the square. Its main façade, with three exterior balconies, is the most surprising.

Casa Ferran: Represents the first modernist work that came to Teruel. Located in the central San Francisco Street, a few yards from the Plaza del Torico, it stands out because of its central storey in which there are many elements of this style such as doors, oculi and balconies.

Casa de Tejidos El Torico: The most colourful of all the houses in the city built in 1912. The use of iron to decorate the exterior aesthetics, as well as the columns, gives a more overelaborate character that is also reflected in the different designs of each floor and in the circular tower that culminates the building.

Others: Besides these three constructions there are others like Casa Bayo, la Casa de los Recetales and Casa Escriche. On the other hand, the old Escuelas del Arrabal, which currently houses the Provincial Historical Archive, the Casino Mercantil, the Post Office building or the Teruel casino complete the list of modernist buildings in the city. 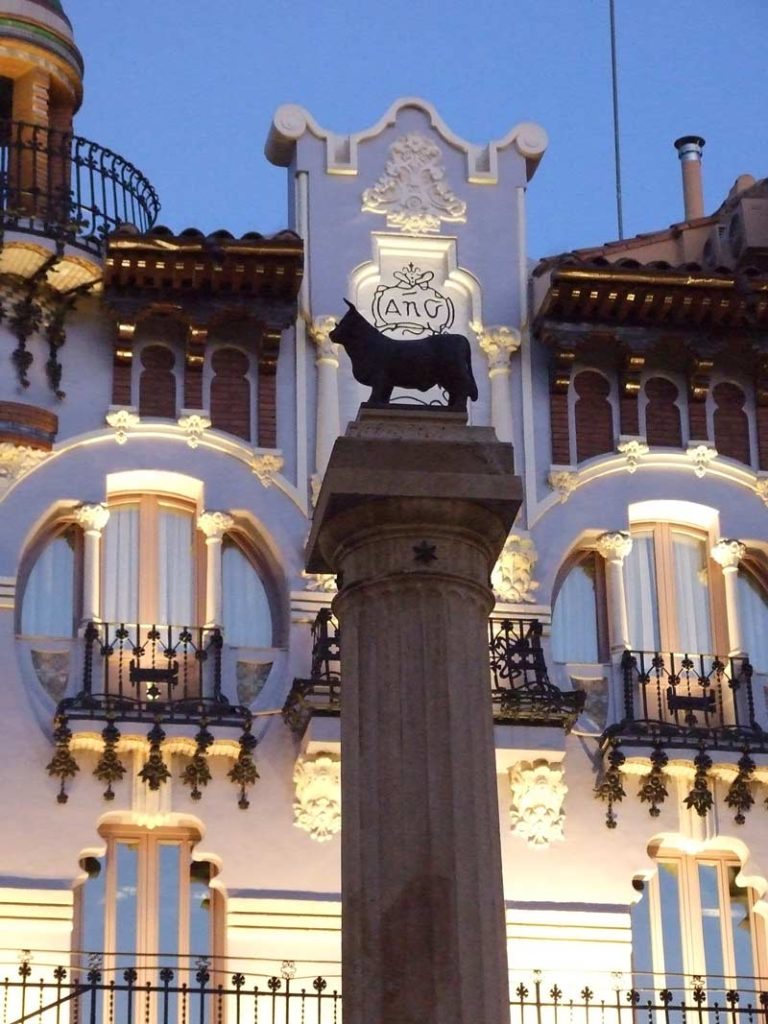 Other places of interest

We have already reviewed interesting towers and buildings, either Mudejar or modernist. But now we must review the collection of resources that are hidden in the city streets.

In the first place and as a vital point, the Plaza del Torico is the starting point of any route. With arcades around its entire perimeter, at the centre of which stands the Torico fountain from 1858 on whose upper part appears the city standard: a small bull that will soon be at the heart of Teruel’s festivities.

If the “Torico” is the emblem of the city, so are the lovers of Teruel whose mausoleum is in the chapel annexed to the Church of San Pedro. There rest the mummies of Isabel and Diego, the two lovers, under the sculpture of Juan de Avalos.

Also, as a differentiating element of the provincial capital is the staircase, dated around 1920 and in the neo-Mudejar style, in whose relief appear allusive images to the history of the lovers.

Next to this beautiful staircase, there is the refurbished Paseo del Óvalo, a space where the social life of Teruel takes place amid shops, pavement cafes and magnificent views. From this promenade, you can access the Plaza San Juan, another of the active places where the Palace of Justice is.

Next to this square, ideal for tapas in any of its establishments, is the viaduct standing 34 metres high, a magnificent piece of architecture parallel to the new viaduct, the latter for traffic and the former for pedestrians.

Also, of note is the aqueduct of Los Arcos, on the outside walls of the old town, a Renaissance construction, but with a marked Roman inspiration.

Right next to it are the medieval walls. After careful restoration, the water tower and a stretch of the old walls were opened to the public in 2017. A tour of its walls allows you to take a walk-through history and enjoy one of the most spectacular panoramic views of Teruel provincial capital. 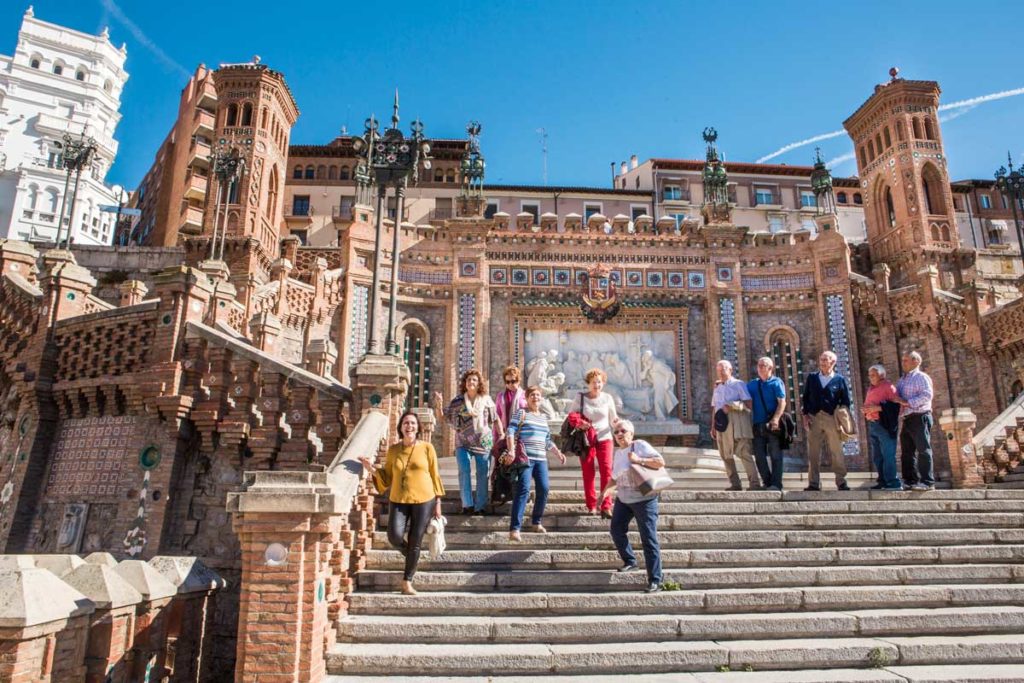 The two most outstanding museums in Teruel are, firstly, the provincial one and the other the diocesan. The first has collections of ethnology, prehistory and archaeology in addition to hosting different seasonal exhibitions. Its building dates from the 16th century and is located just behind the cathedral, in the old Community House.

On the other hand, the diocesan museum, in the Plaza de la Marquesa, stands in a 16th-century building being the seat of the Episcopal Palace. Inside we will be able to visit an important collection of sacred art.

An itinerary of its churches 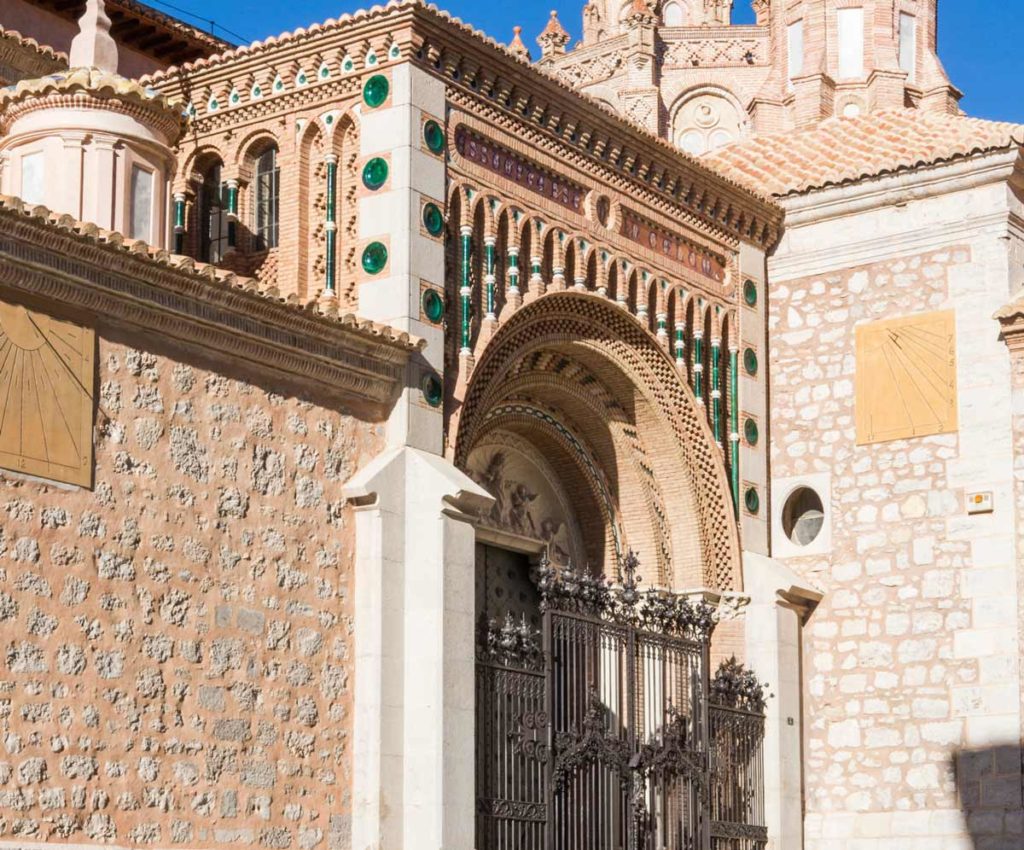 Although Teruel’s fame rests on many of its buildings, emphasizing among these the Mudejar towers, there are many examples of religious art in five other churches. Along with some as important as San Pedro, San Martín and San Salvador, contiguous to the towers of the same name, others appear such as San Francisco, late sixteenth century Gothic, the Church of San Andrés, Santa Catalina, in the Plaza Cristo Rey, or the Convent of San José and Santa Teresa, also in this same square.

The Lovers of Teruel

Tells the story that… in the 13th century, two noble families lived in Teruel, the Seguras and the Marcillas. Isabel and Diego, children of these two families and passionate lovers, never married because the proud and influential Seguras did not approve of the possibility of marrying into the humble Marcillas.

Heartbroken, the young Diego left for distant lands to seek his fortune and returned to his city, years later, proud and triumphant after successes in battles and conquests. At the gates of Teruel, he heard the bells of the whole city ringing in celebration of the marriage of Isabel to Pedro de Azagra since the agreed deadline between Diego and Isabel had expired.

The next day Diego’s funeral was held. The noble Isabella, still in her wedding dress, advanced towards his tomb to give him the kiss she had never been able to give him in life.

That fact touched the whole city so much that it decided to bury the bodies of both in the same church where the tragic event took place. 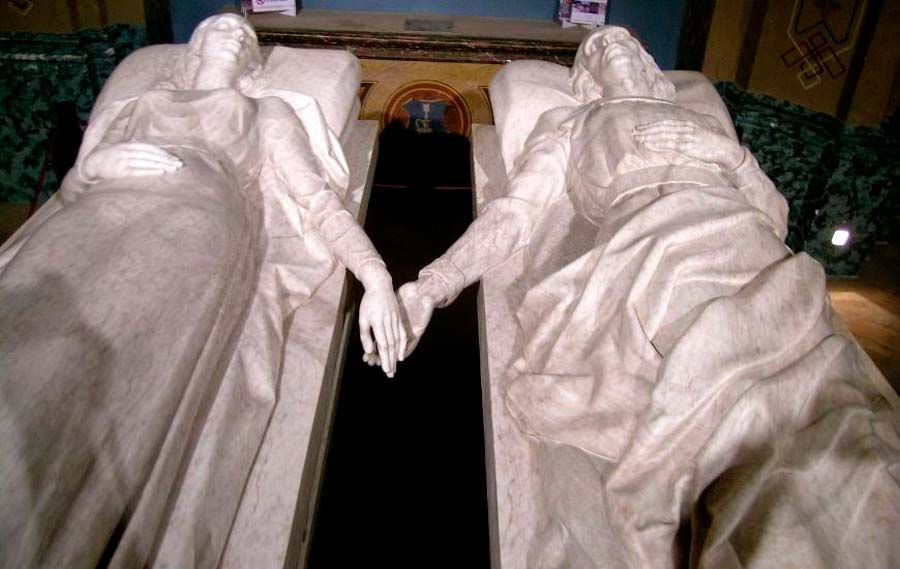 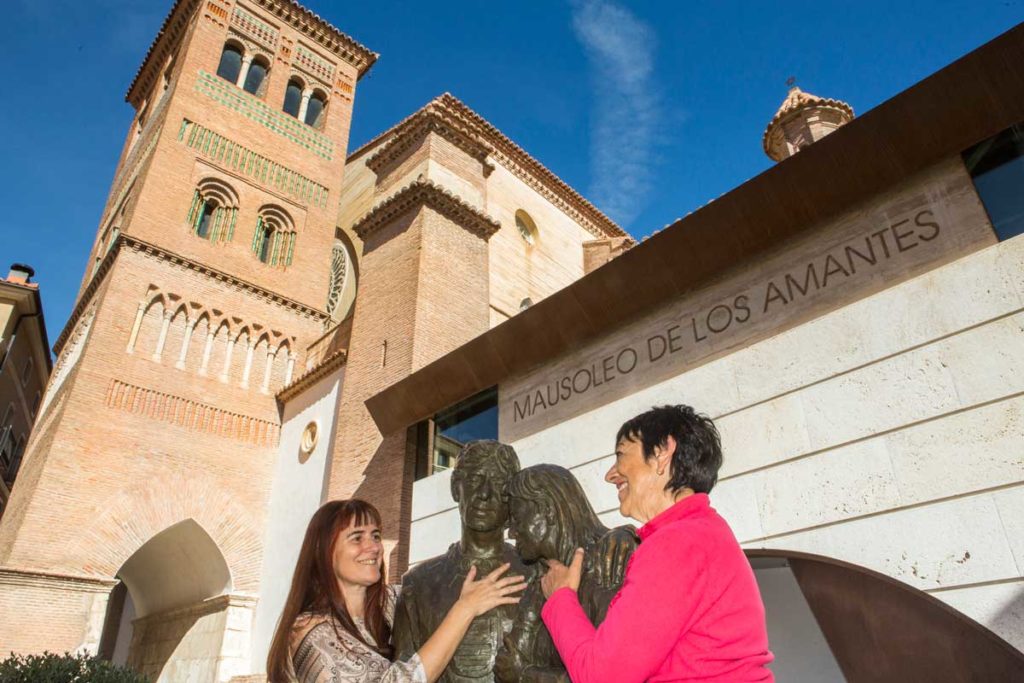