Rueda, an unforgettable place next to the Ebro

In the town of Sástago, on the banks of the river Ebro, stands the superb monumental ensemble of the Monastery of Rueda, one of the foremost exponents of the Cistercian order in Aragon. You will be dazzled by the austerity of its church, its Gothic cloister, its slender Mudejar tower and the large 18-metre-diameter hydraulic wheel that gives its name to the monastery.

A bit of history

The date of the beginning of the works on the monastery at Rueda is in 1202. However, it is necessary to go back in time to find the origins of the order itself. The Cistercian order came into being as a result of a monastic renovation movement in the 11th century that led to strong religious and artistic repercussions, seeking to revitalise the spirit of the Rule of Saint Benedict: work and prayer, Ora et labora.

The monastery of Rueda is the culmination of a journey begun in 1152 when the Abbey of Our Lady of Saltz was founded by monks from Gimont. A decade later the Abbey of Juncería was founded establishing Rueda as a satellite farm

Alfonso II granted to the Cistercian monks the town and the castle of Escatrón in 1182. In 1238 the church was consecrated, but it was not until the end of the 14th century or beginning of the fifteenth when the medieval factory of the monastery was finished, completing the final phases of the Cistercian temple and a series of private outbuildings: area for converts, agricultural and craft domains, abbot’s palace… These spaces were to undergo a profound restoration in the successive centuries (16th and I7th) to culminate with the present layout around the spectacular Plaza of San Pedro, emphasizing the quality and visual imprint of the Herrerian Gallery which joins the abbot’s palace with the medieval works. One of the essential characteristics of this monastic ensemble is the waterworks, possibly implemented from the outset. Located on the banks of the river Ebro, the waterwheel and the gigantic Ferris wheel allowed water to be brought to the monastery, which was distributed through channels throughout all the buildings, essential for the operation of agricultural irrigation, as well as the daily life of the monks themselves.

With the Mendizábal disentailment in 1836 the religious life of the site came to an end, being relegated for agricultural and livestock purposes. Finally, in 1998 the deed of the same was transferred to the General Council of Aragon. 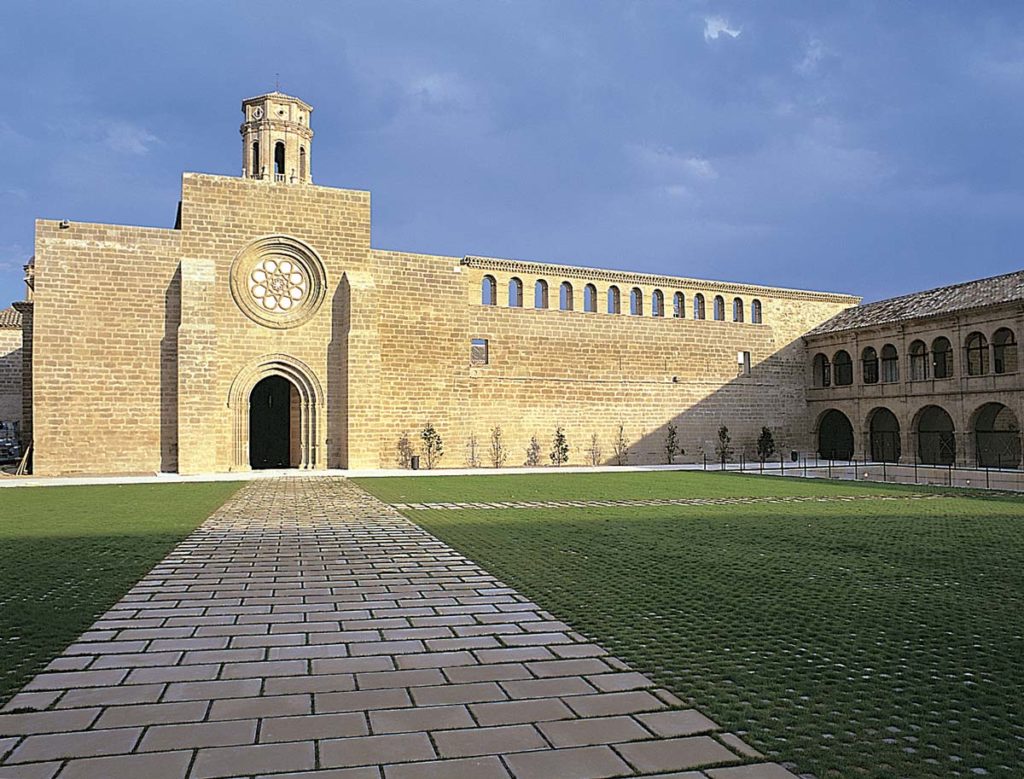 You can get to know the monastery using Guided tours of Aragon, a visit that will guide you through all the rooms in the monastery in a breathtaking and surprising walk through history. We propose a tour of the cloister to enjoy the capitals, the chapter house, the upper cloister and the Mudejar tower, the well and the cistern that collected the rainwater. You will discover monastic life through the dormitories, the dungeons, the scriptorium, the refectory and the granary. 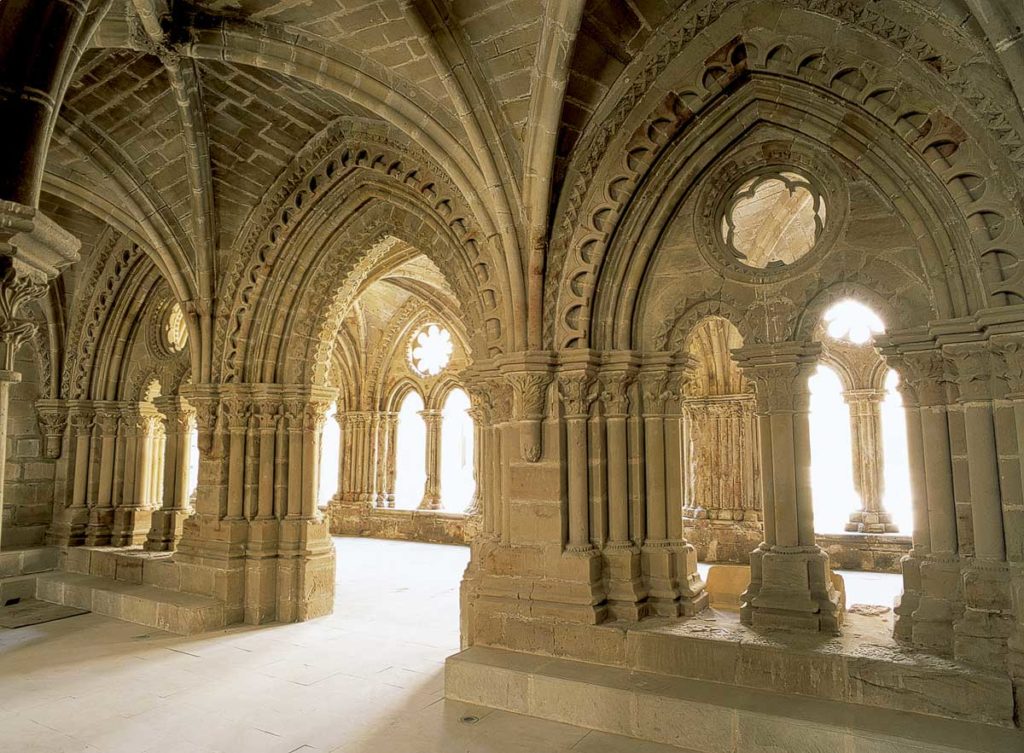 The main access road to the monastery from Zaragoza is the N-232 heading towards Castellón. Parallel to the course of the river Ebro, you cross Fuentes de Ebro and reach Quinto, where you take the A-221 road that passes through La Zaida and leads finally to Sástago. In the municipal district but outside the urban area stands the monastery. In total, 74 kilometres that can easily be covered in one hour.

Another alternative route is to take the A-2 highway in the direction of Barcelona, taking the Bujaraloz exit then afterwards following the A-2015 into Sástago. 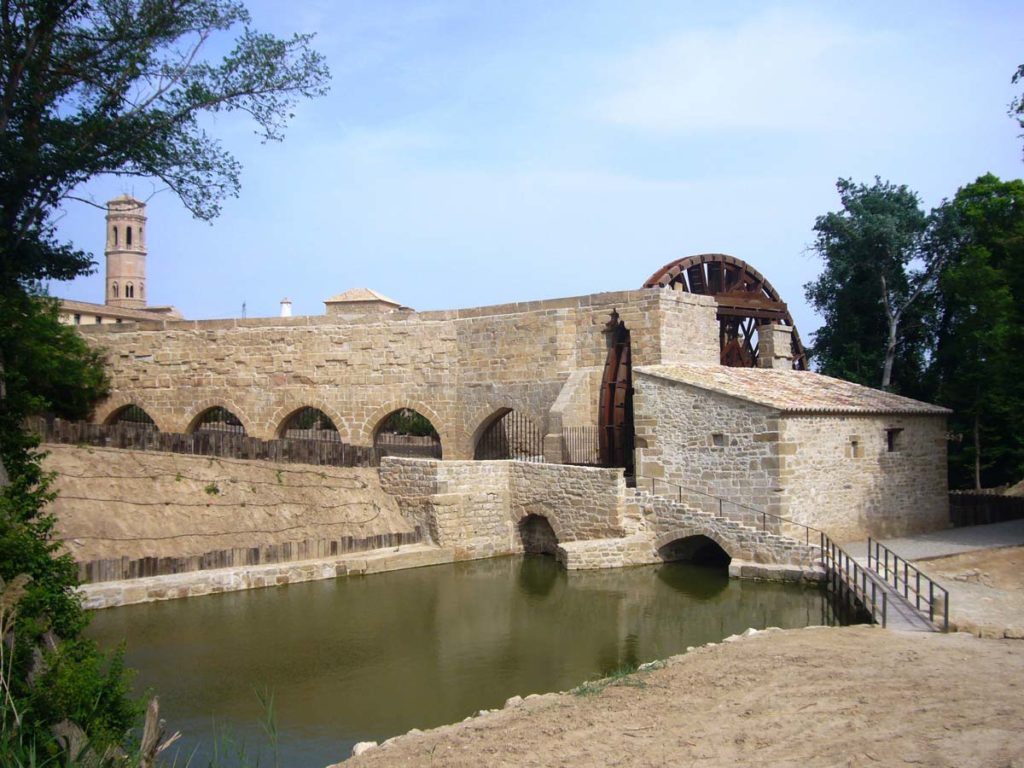 The richness and attractiveness of these lands had already been appreciated by the Romans, who built here the first city in the Ebro Valley: the Colonia Celsa. In Velilla de Ebro you can walk among the vestiges of this ancient Roman city. Not very far, in Azaila, you will find another of the most relevant sites in Aragon, the Iberian city of Cabezo de Alcalá. Touring its cobbled streets and dropping in to the visitor centre will allow you to get to know the history of the pre-Roman peoples and the phenomenon of Romanisation in Hispania.

If you are a fan of hiking, you will enjoy touring the Ebro Natural Path (GR 99), a long path that runs along the banks of the Ebro amid groves, meanders and typical riverside vegetation.